Square Enix Wants All The Money

Oh Sqeenix. You so cray cray.
The publisher developer have been busy lately, so busy in fact, I can hardly keep up with all the news!

Recently the company released The World Ends With You to the iOS market, titled The World Ends With You: Solo Remix. In case you didn’t know, TWEWY is one of the best games for the DS. Not only is the gameplay, story, and music a perfect blend, but the gameplay mechanics for the DS is spot on. Despite the critical acclaim and fandom that has grown, Sqeenix was tight-lipped about the future of the series until recently Kingdom Hearts 3DS featured characters from TWEWY. Now, the series is getting much-needed love, as well as rumors of a sequel.

This is great news, right?

Well, Square Enix thinks TWEWY should be priced at $17.99 for iPhone, and $19.99 for iPad (as they are apparently two separate things). The iOS and Android market are successful because of their ease of access, broad appeal, and prices. For a port, apparently it’s great. But for twenty bucks, you can pick it up for the DS.

But that’s not the only offender for Square Enix on the iOS. Final Fantasy Tactics is on the iOS market for $16 for iPhone, and $18 for iPad. Even though it’s a port of the 2007 War Of The Lions variation, it’s still an aged game. Despite its brilliance, Sqeenix seems to think that kind of pricing is acceptable. And maybe perhaps it is, but I would much rather defend a $5-$10 price tag than feel offended by a $16+ tag.

Their upcoming title, “Final Fantasy Dimensions” is an old school-type Final Fantasy, complete with fighters and black mages. I was actually excited for the new game, and thought it was one of the more exciting titles at E3. Imagine my disappointment when I heard the entire game would sell for $30. It’s bad enough that it’s being sold in episodic fashion, meaning that the gameplay will be broken up by chapters, but the insane price is just so overwhelming. The game itself looks like it was straight ripped from RPG Maker, which isn’t bad, but I can play Barkley, Shut Up & Jam: Gaiden for free and have a great time. 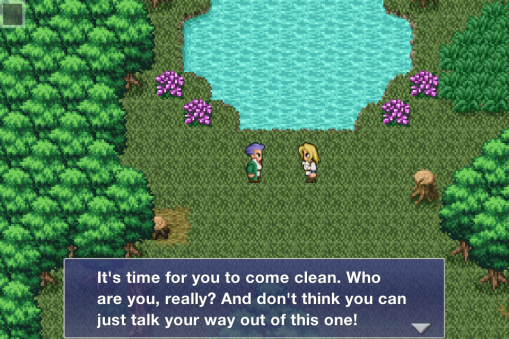 But this is not on deaf ears though, Square Enix recently started the Core Online, which allows gamers to play some of their previous hits, like Hitman and Tomb Raider, straight from their web browsers, with low system specs! And for free as well!

Pending you sit through the ads, which break up gameplay, at 10 minutes of gameplay per one minute ad (though it’s stated that it’s suppose to be twenty minutes), though you reach a maximum of 60 minutes, but can reset by watching extra ads.  If that’s not enough, you can always pay for the entire game, or per level.

So excuse me, Square Enix, if I’m not jumping at the chance to play any of this. Honestly, the only game on my radar that I want to play from you is Final Fantasy versus XIII, and after years of waiting I’ve toned down my excitement.

So is it just that the iOS market is growing, and prices need to reflect that? I see the argument that these are solid games, meant to be enjoyed for more than five minutes, but most of these are ports that cost the price of the original. And perhaps Core Online isn’t as fraudulent as I think.

It’s hard being a gamer on a budget.

Hello, my name is Chris Eric Detrick and I'm a currently a student at Virginia Commonwealth University and a freelance video game writer. I'm stationed out in Richmond, Virginia and looking for work. My blog has been featured in Freshly Pressed and since then I have only grown as a writer and journalist. You can contact me via email: chrisericdetrick@gmail.com
View all posts by Chris "Kodoku" Detrick →
This entry was posted in Video Games and tagged budget, Core Online, Enix, FF, Final Fantasy Demensions, Hitman, iOS, iPad, iPhone, Laura Croft, ripoff, Square, Square Enix, The World Ends With You, TWEWY. Bookmark the permalink.

4 Responses to Square Enix Wants All The Money